This briefing also provided an opportunity to hear the views of UN and the host Government on what was necessary for this logistic preparatory including Venue and Accommodation, Public Forum, Study Tour, and others which was followed by a lively Q&A session. Ambassador in Charge of the WCDRR, Mr Kenichi Suganuma also conducted a presentation on Japan`s Effort – Mainstreaming Disaster Risk Reduction. The briefing was attended by journalists from Germany, France, Hong Kong, Philippine, Singapore and the United States and 36 Diplomatic Mission representatives in Tokyo. Counsellor Julia Korovou and Second Secretary Ms. Kelera Savu attended on behalf of the Embassy. 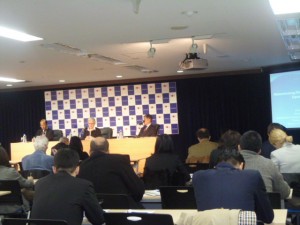