The newly appointed Director of the Pacific Islands Centre, Mr Ryuzo SAITO called on Ambassador Isikeli Mataitoga on 21 April 2016. This was a courtesy visit by the new Director following his appointment and he took the opportunity to discuss a few issues. 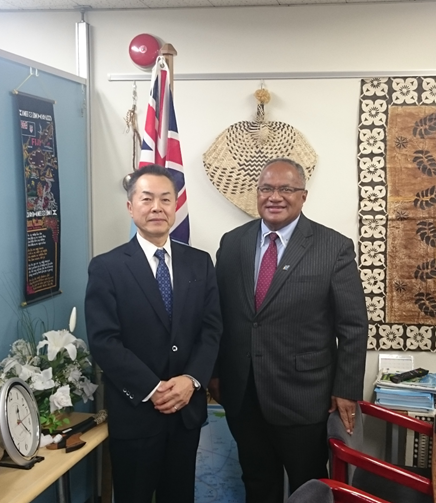 Mr Saito and HE Mataitoga

Mr Saito noted that his background was from the private sector of Japan and he had many years in project business developments for many Japanese Companies in overseas countries. He is looking forward to the challenge of working with the Pacific Island Countries through their diplomatic missions in Japan. Mr Saito was keen on getting insights and learning from Ambassador Mataitoga’s experience in undertaking business promotion in Japan for Fiji.

Ambassador Mataitoga welcome Mr Saito to his new appointment and advised him that the Fiji Embassy, Japan will assist him and the PIC during his tenure, as it has done in the past. He encouraged Mr Saito to learn the challenges of small island states and take time to understand the situations of each PIC. The Fiji Embassy, Tokyo is happy to assist him and our network of Honorary Consular Corp in Japan, as he develops his priority activities for the Pacific Island Countries.