A historic instrument was signed in Moscow, Russian Federation today, 12 October 2016, broadening the Fiji-Russian bilateral relations to cover areas relating to cooperation in national disaster and in the mitigation of technological disaster.

The instrument, known as the Protocol of Intentions, provides the framework that will guide the relationship between Fiji and the Russian Federation in National Disaster Management and Emergencies.

The signing of this document is again another important step in deepening relations between the two countries. 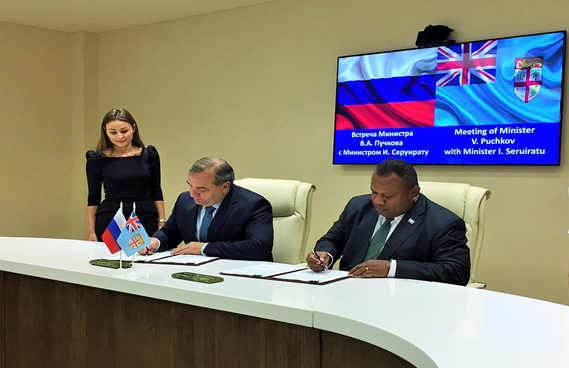 HE Mr. Vladimir Puchkov, Minister for Civil Defense, Emergencies and Elimination of the Consequences of Natural Disasters of the Russian Federation and the Hon. Mr. Inia Seruiratu MP, Minister of Agriculture, Rural and Maritime Development and National Disaster Management of the Republic of Fiji, both agree that the instruments they have signed will enhance the development and implementation of means aimed at strengthening the reliability of natural disaster forecasts and the assessment of disaster risks.

The two Ministers jointly expressed the hope that through this framework, more intensive cooperation between Fiji and Russia will be undertaken in the areas of Emergencies and National Disaster Management. It will also allow the parties to constantly review and determine the most effective directions of cooperation between the two countries, in the elimination and prevention of national emergencies. The two Ministers also underscored their commitment to enhance the joint participation of their respective national experts in various training initiatives to ensure that they are fully prepared to deal with any National Disaster situation or emergencies that occur.

Other areas that were discussed by the two ministers include Information Exchange for National Disaster and the use of cutting edge technology in disaster preparedness, mitigation and resiliency.