In a solemn and historic ceremony held on 9 November 2016, in the city of Hanoi, Vietnam, HE Isikeli Mataitoga presented the Letter of Credence, his official appointment as Ambassador Extraordinary & Plenipotentiary of Fiji, to HE Mr. Tran Dai Quang, President of the Socialist Republic of Vietnam.

This is the first time an Ambassador has been appointed for Fiji to Vietnam since diplomatic relations was established in 1993. 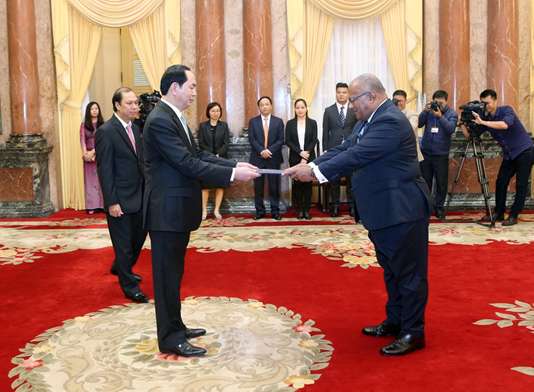 In accepting the letter of credence from Ambassador Mataitoga, HE Mr. Tran Dai Quang expressed the desire of the Vietnamese Government that bilateral relations between the two countries will deepen during his tenure.

HE President Quang voiced his hope that the two countries will further engaged at high level political exchanges, as well as senior government officials level, to promote better understanding of each country’s development priorities and boost greater awareness. The President urged that Fiji and Vietnam look at ways to promote trade and economic relations between them and encourage the role that the private sector plays. 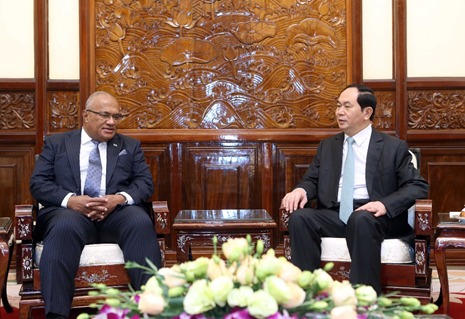 HE President Quang in discussion with Ambassador Mataitoga

Mr. Quang also urged Ambassador Mataitoga to visit and engage with industry and business representatives in Ho Chi Ming City, the commerce capital of Vietnam. President Quang further observed the need to discuss ways of cooperative support between the two countries, particularly in the United Nations, as well as other international forums, on critical common issues.

In his response, Ambassador Mataitoga thanked President Quang for accepting his Credentials as Ambassador to Vietnam; formally opening the way for the two countries to develop and diplomatic ways to improve their relations in all spheres of government. HE Mataitoga informed that he is keen to pursue and deepen bilateral relations between Fiji and Vietnam in all areas referred to by the President. He observed that Fiji is keen to explore innovative ways, on boosting trade and investment relations between the two countries and underscored the role of the private sector in this regard.

Fiji-Russia Agree to Cooperate in the Area of National Disaster Management and... Hon.Minister Usamate Attends Regional Consultations In Tokyo
Scroll to top