A meeting between Ambassador John Fritz and Ambassador Isikeli Mataitoga was held on Tuesday 13 January 2015 at the Embassy of the Federated States of Micronesia. The meeting is the second in a series that Ambassador Mataitoga is undertaking in the month of January to review bilateral relations and discuss how to improve where needed. These series of meeting is also to explain Fiji’s position on issues that need clarification and where support is needed in areas where Fiji is engaging with Japan.

There were three core issues that were discussed between the two Ambassadors which Fiji raised and seeks the support of the Federated States of Micronesia:

Both Ambassador’s agree that the above issues should be discussed during the PALM 7 SOM and for it to be substantially included in the PALM 7 agenda for Leaders. The meeting was useful in sensitizing FSM about some of the issues that Fiji would like to include as part of PALM 7. 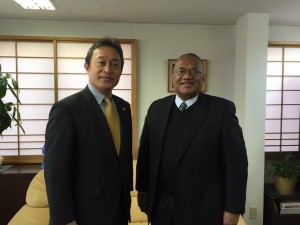 HE Mr John Fritz with HE Mr Isikeli Mataitoga