On Wednesday 4 February 2015, JRFU Liaison Officer Ms Amy Matsuo visited the Embassy to provide an update on the upcoming Tokyo Sevens 2015. With 7s Rugby chosen as the new official Olympic sport at 2016 Rio de Janeiro, this year’s Tokyo Sevens is promised to be full of excitement and enthusiasm. 16 teams will participate in the Tokyo Sevens 2015, which will be held from Saturday, 4th April to Sunday, 5th April at the Prince Chichibu Memorial Rugby Stadium, Tokyo.

The Fiji Team which won the Tokyo Sevens 2014 will be a team to watch and the Fiji Community in Japan are encouraged to turn up in big numbers to render support for the boys. 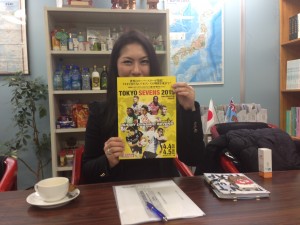