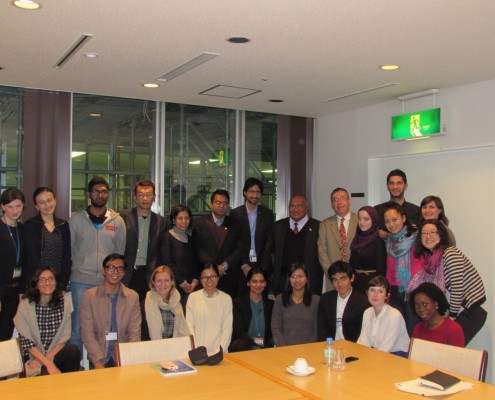 Participants at the UNU Seminar

On Thursday 4th December 2014, H.E. Ambassador Isikeli Mataitoga conducted a seminar on “Climate Change and its effects on island states: Fijian Experience” in Tokyo. SS Savu was also in attendance.

This seminar investigates the current effects of climate change and sea level rise present significant risks to the sustainable development of Small Islands Developing States and the long term effects that have threatened the very existence of some small islands, in particular reference to Fiji.

A brief overview of Fiji and its Climate Change impacts was initially outlined. The Q&A discussion then focuses on the challenges and the Guiding Policies made available to address rising issues. Climate change and rising sea level which currently present significant risks to the sustainable development of SIDS.

It was noted that climate change is seen as an economic issue, as a security issue and bigger players should certainly look into areas of tackling these through variety of forums such as the United Nations Climate Change Conference being held in Lima, Peru from 1–12 December 2014. The negotiators in Lima are now focusing on a draft agreement that can be refined before the meeting in Paris next year, 2015.

It is suggested that bigger players will have to play more roles, and make good promises of financing to reduce emissions and mitigate climate change impacts, which range from the spread of diseases to coastal flooding to major disruptions to agriculture and marine resources. Although climate change impacts may not be felt equally across the planet, it is an inherently global issue.