On Friday 13th June 2014, Madame Venina Mataitoga, Spouse of HE Mr Isikeli Mataitoga and Vice Chairperson of the 38th Asia-Pacific Festival and Charity Bazaar – 2014, together with Madame Shoma Jabeen of the Embassy of the People’s Republic of Bangladesh, hosted a Cheque Sharing Ceremony at the House of Representatives Members’ Office Building in Nagatacho, Tokyo. In a gigantic ceremony followed by a reception that showcased the one-year activities undertaken, one-hundred forty spouse of Ambassadors, members of the diplomatic corps in Tokyo from the 22-member countries and Japanese volunteers celebrated the job well done and cheque sharing ceremony.

Founded in 1971, today, ALFS counts for 26 member countries and a general membership of about 300. ALFS President, Mrs Haruko Komura opened the ceremony by thanking everyone that participated and assisted in the 38th Asia-Pacific Festival and Charity Bazaar – 2014, noting that this year`s event was a great success with proceeds collected to be utilized to support disadvantaged women and children in the Asia-Pacific region. Mrs Komura strongly stressed that “the proceeds is a fruit of our effort and cooperation”, and further urged everyone for their continuous support and cooperation towards ALFS and its activities.

Vice Chairperson Madame Venina Mataitoga followed by thanking ALFS President and Board of Directors for their assistance and support, as well as the Madams, donors and volunteers for their effort and unwavering commitment towards ALFS, also hoping that the Society will continue to grow and become a powerful body impacting lives of women and children who are disadvantaged and suffering in the Asia – Pacific Region.

The two-hour event also saw President Komura presenting gifts of appreciation to Madame Shoma Jabeen and Madame Venina Mataitoga, later followed with the introduction of new Chairperson Madame Momoe Fritz and Vice Chairperson Madame Wan Wang by Madame Jabeen, as well as slideshows of the one-year activities that have been undertaken. Madame Shim Lee of Korea also said a few words prior to her departure this week.

Guests later enjoyed a light reception of finger foods and confectionery from the Bangladesh and Fiji Embassies. It was a pleasant event enjoyed by everyone who attended. Madame Mataitoga was accompanied by SS Savu, FAO Aoki, PA Tabuyaqona and TCO Kawabata. 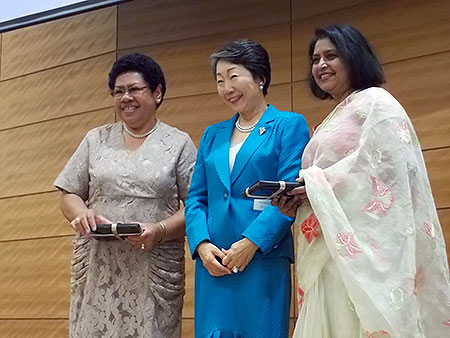 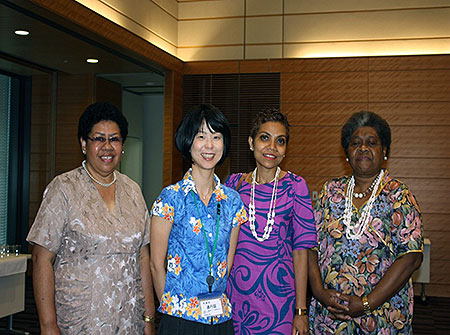