As the designated diplomat for the Fiji-Philippines relations at the Fiji Embassy in Tokyo, Counsellor Julia Korovou visited the Philippines from 20th to 24th October 2014 for a series of meetings and interactions to further boost diplomatic and trade relations between the two countries. She started off with a meeting with Fiji’s Honorary Consul in Manila Mr. Jesus M. Pineda and his Executive Vice President, Mr. Juan Carlos Pineda which was held on Tuesday, 21st October. This was the first time that Counsellor Korovou ever met with HC Pineda and at the outset thanked him for his generous assistance and cooperation in organizing the programme of the visit as well as the logistic arrangements. Important issues discussed during the encounter covered the Fiji/Philippines Bilateral Development Cooperation Agreement, the signing of the 3 MOUs, Ambassador Mataitoga’s proposed visit and courtesy calls on Provincial Governors and City Mayors and the Seminar on Fiji Business Environment and Tourism tentatively scheduled for January 2015. Counsellor Korovou also took time to give an update on the political situation in Fiji after the elections. In response, HC Pineda advised that he and his family are planning to visit Fiji in March 2015 to explore some business opportunities and at the same time take with him a few business affiliates who may wish to invest in Fiji. 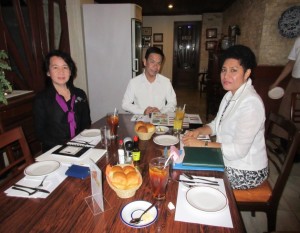 On Wednesday, 22nd October, Counsellor Korovou was able to meet with Ms. Angel Bognot of Afro Asian World Events and Mr. Teody Espallardo of Manila Travel Agent. The purpose of the meeting was to solicit for their support in facilitating the Mission’s request for holding a Fiji Business Seminar in Manila, Philippines in January 2015 to aggressively promote Fiji as a tourist destination to Filipinos. At the outset, Counsellor provided a brief on Fiji’s profile articulating on its population and economic growth, macroeconomic environment as well as the history of the tourism industry in Fiji, Discussion then focused on the seminar preparation covering the programme, participants and the proposed budget. Ms., Bogot also gave a brief account of the tourists industry in the Philippines given the recent increase in outbound travel particularly those in the province due to high remittances from families living abroad.   According to her, this proposed seminar is assessed to be huge given the status of Philippines participants and their high expectation of such events. Hence, it was then recommended that theFiji Business Seminar be rescheduled to either the month of April or June in 2015 to give ample space for the preparation.

The meeting with Mr. Jason Anasarias, Assistant Director for the Office of Asian and Pacific Affairs was held on Thursday, 23rd October 2014 and the discussion focused of the following issues: The Fiji/Philippine DCA that is yet to be ratified; The three MOUs viz Fiji/PCA, Fiji/IRRI, and Fiji UPLB; Deepening of relations through Ministerial visits; Establishment of Joint Council Bilateral Cooperation [JCBC] or SOMs periodical meetings as follow-up mechanism to Ministerial meetings and further exploring other possible economic; social, cultural and technical cooperation in Agri-business, Food processing/value adding and Total Quality Management. In conclusion, both parties reiterated on the need to fast-track ratification of the DCA as this would be the overarching bilateral guide that would further initiate establishment of subsequent bilateral cooperation of mutual advantage to both countries.

Fijian and Russian Ambassador’s Meet to Compare Notes and Update Each Oth... Expanding Fiji’s Footprints in the Philippine
Scroll to top