On Thursday, 16th October 2014 Ambassador Isikeli Mataitoga paid a courtesy visit to his Russian counterpart H.E. Mr. Evgeny Vladimirovich AFANASIEV, Ambassador Extraordinary and Plenipotentiary, Embassy of the Russian Federation in Tokyo. This meeting is part of our periodic s consultation that the two Ambassadors engage in, to provide updates on issues of current interest to Fiji/Russian bilateral relations. The periodic meeting also provide a useful forum to discuss new issues of cooperation and share information. During this meeting, the Ambassadors discussed several important issues as follows: 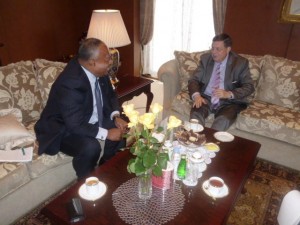 Ambassador Mataitoga and his counterpart, Ambassador Afanasiev during their meeting

2] Visit by Russian Minister for Defence to Fiji

To round it off, Ambassador Mataitoga alluded on the One Day Seminar that FET is co-jointly organizing with Sasakawa Peace Foundation on the 27th of November 2014. The seminar will focus on Japanese Aid Diplomacy in Pacific Island Countries, and will include 2(two) main presenters and 4(four) commentators who will speak for 10 minutes each, consisting of PICs Ambassadors in Tokyo, Private sectors and Government of Japan. Ambassador Afanasiev raised his interest in the objective of the seminar and requested that the Russian Embassy be also invited to come and observe which was agreed to by Ambassador Mataitoga.

All in all, the two Ambassadors enjoyed the meeting and looked forward for another get together to update each other in due course, probably after Ambassador Mataitoga’s visit to Moscow. 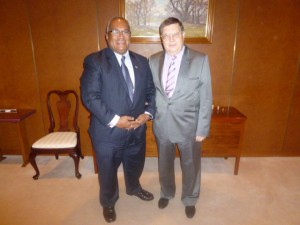 The two Ambassadors in jovial mood after their meeting