In the afternoon of Friday 25th April 2014, HE Mr Isikeli Mataitoga called on the Mayor of Akita City, Mr Motomu Hozumi. The call was convened for greater cooperation between Fiji and Akita, noting on the promotion of greater social and cultural exchange opportunities for all people and greater expansion of Sports diplomacy. The Ambassador said the visit was an opportunity for him to make a personal connection with the leaders of Akita prefecture, enhancing future ties of exchanges between our people. He said Fiji wants to have stronger ties with all of them.

Mayor Hozumi thanked the Ambassador for visiting and for promoting close cooperation ties between Akita and Fiji. He confirmed his full support and assistance on the issues raised by the Ambassador. Further promising communication and exchanges of detailed information were noted. The Ambassador was accompanied by Second Secretary Kelera Savu, Fiji`s Honorary Consul General in Sendai, Mr Takayuki Moriya and Executive Assistant, Mr Toshiyuki Yamaguchi. 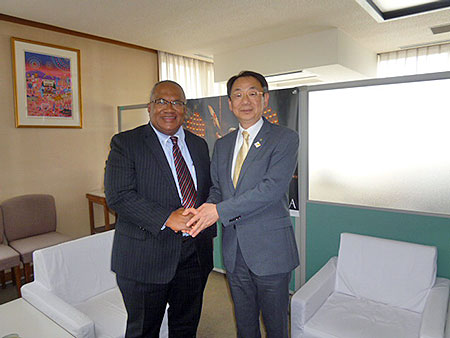