The Japan Fisheries Association New Year’s Reception was held on Tuesday, 6th January 2015 at the Hotel Okura in Tokyo whereby more than 200 people were in attendance. Notable were the presence of many Members of Parliament who came to brace the occasion as well as to render their support for the organization for their contribution in the country’s economic wellbeing. Counsellor Julia Korovou and First Secretary Jovesa Vocea attended the reception on behalf of FET.

Established in 1882, the Japan Fisheries Association is the umbrella organization for the entire fishing industry of Japan with more than 400 members including associations, private companies and individuals who contribute to the operation of the organization. In delivering his keynote address, Mr. Toshiro Shirasu, President of the Association alluded to the main purpose of the organization which is to promote the fishing industry and contribute to the economic sector and cultural heritage of the country. He further stated that the contribution by members of the association is greatly recognized and acknowledged which has seen Japan as one of the world’s largest fishing fleets and accounts of nearly 15% of the global catch. 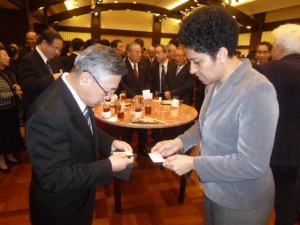 Counsellor Korovou also had a chance to meet with Mr. Shirazu