His Excellency the President of the Republic of Fiji, Ratu Epeli Nailatikau this morning received the credentials of the new Japanese Ambassador to Fiji His Excellency Mr Takuji Hanatani. Ambassador Hanatani was welcomed by the head of state at Government House as he presented his Letters of Credence.

The ambassador, who graduated from Ritsumeikan University under the Faculty of Law, comes in as predecessor, Mr Eiichi Oshima, completed his term this year. Mr Hanatani joined the Japanese Foreign Service in 1979 and has served at Japan’s diplomatic establishments including positions such as Minister in Embassy of Japan in Kenya, Minister in Embassy of Japan in Belgium and Consul-General of Japan in Atlanta, the Unites States.

He is also accredited to Vanuatu during this term. 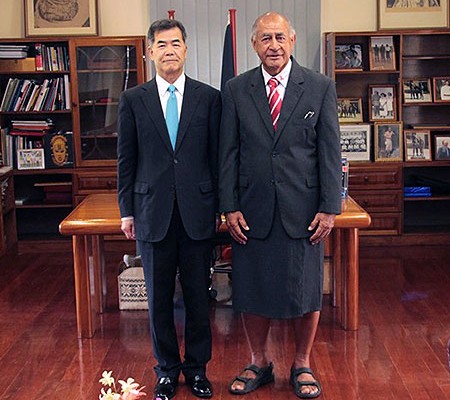