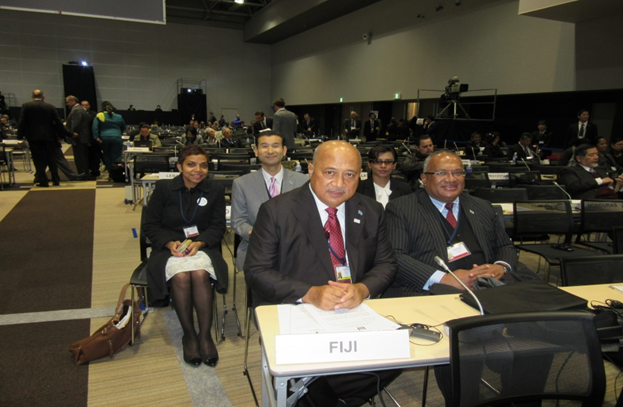 Minister Kubuabola and part of Fiji Delegation at Main Hall

The 3RD UN World Conference on Disaster Risk Reduction was held in Sendai, Japan     from   the 13th-18th March 2015. The Honourable Ratu Inoke Kubuabola, Minister for Foreign Affairs led the Fiji Delegation which comprised staff of the Fiji Embassy Tokyo (FET), PRUNOG, and MFA. The other 9 members were represents of Fiji’s municipal institution, academia (USP), Disability community (Fiji Blind Society), Bureau of Statistics, Media, and Women’s group, most of whom attended to their respective Working Sessions as panellists/presenters. The Minister upon his arrival from Morocco delivered Fiji’s Statement on Tuesday, 17 March. The impending disasters of Tropical Cyclone Pam resulted in the cancellation of the attendance of the Minister responsible for National Disaster Management, Hon. Seruiratu and Director NDMO. Diplomats from the Fiji Embassy Tokyo and PRUN Office Geneva attended to the relevant Working Sessions including the three registered Ministerial Roundtables themed International Cooperation in support of a post-2015 framework for Disaster Risk Reduction (DRR); Governing Disaster Risk: Overcoming Challenges; and Public Investment Strategies for DRR. Negotiation and finalisation of the Sendai Framework Document was a core throughput. Logistics and Protocol services prior and during the Conference were rendered by FET. 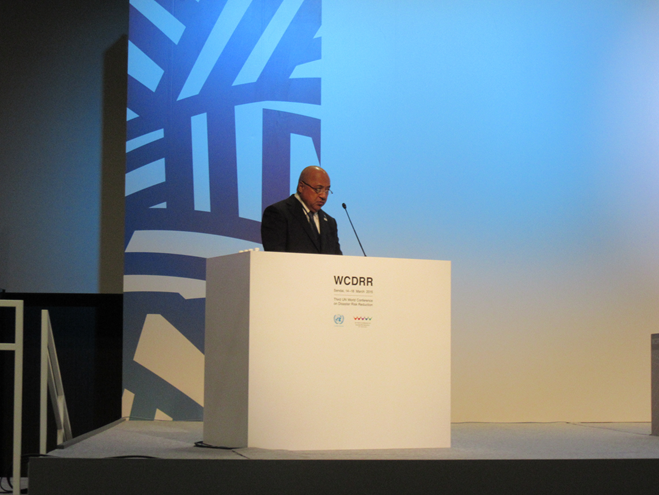 Ten years after the Hyogo Framework for Action, disasters continue to undermine efforts to achieve sustainable development. “The Heads of States and Governments, Ministers and delegations at the 3rd WCDRR in recognizing the increasing impact of disasters and their complexity in many parts of the world, declared their determination to enhance efforts to strengthen disaster risk reduction to reduce disaster to losses of lives and assets worldwide. Building on the Hyogo Framework, the present Sendai Framework aims to achieve the following outcomes over the next 15 years (2015-2030):“the substantial reduction of disaster risk and losses in lives, livelihoods and health and in the economic, physical, social, cultural and environmental assets of persons, businesses, communities and countries.” States declared that the realisation of this outcome requires strong commitment and involvement of political leadership in every country at all levels in the implementation and follow-up of this framework and in the creation of the necessary conducive and enabling environment. To attain the expected outcome, States consented that the following goal must be pursued: “Prevent new and reduce existing disaster risk through the implementation of integrated and inclusive economic, structural, legal, social, health, cultural, educational, environmental, technological, political and institutional measures that prevent and reduce hazard exposure and vulnerability to disaster, increase preparedness for response and recovery, and thus strengthen resilience.” “The pursuance of this goal requires the enhancement of the implementation capacity and capability of developing countries, in particular the least developed countries, small island developing States, landlocked developing countries and African countries, as well as middle-income countries facing specific challenges, including the mobilisation of support through international cooperation for the provision of means of implementation in accordance with their national priorities.”

At the Conference, States also pronounced their respective messages of sympathies and condolences to the people of Vanuatu and neighbouring countries that fell victims of Tropical Cyclone Pam. 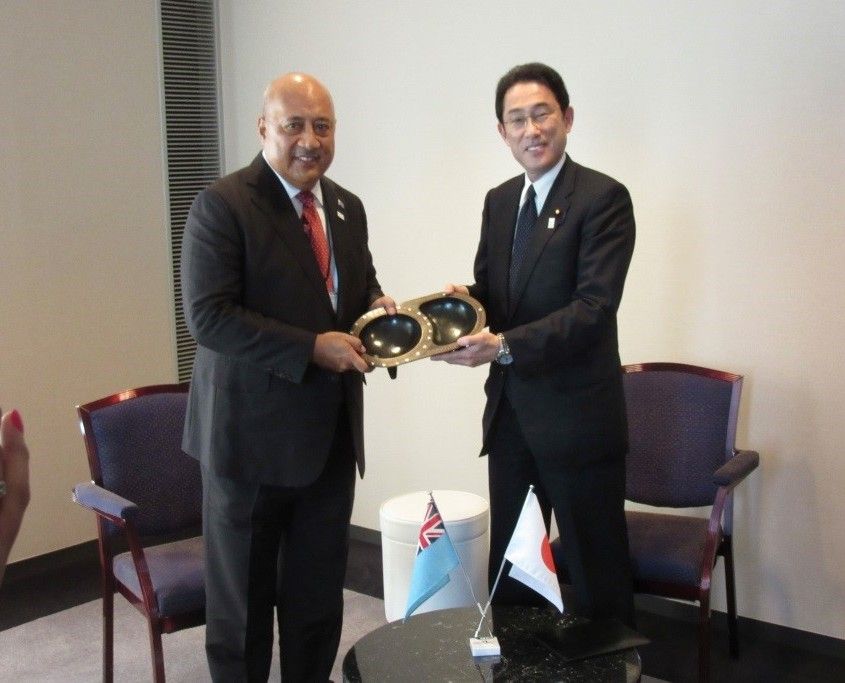 In the margins of the Conference, various meetings and activities were organised which encompassed a bilateral meeting between Minister Kubuabola and his Japanese counterpart, Minister Kishida which was held on Sunday, 15th March 2015. The discussions centered on bilateral concerns and initiatives to lift and deepen the two countries relation and cooperation. A priority issue discussed is the proposed visit of the Fiji’s Prime Minister Hon J.V. Bainimarama to Japan in May 2015 and his meeting with Japan’s Prime Minister the Hon. Mr. Shinzo Abe. Both Ministers agreed that this proposed meeting, would be a major boost in lifting Fiji/Japan relations to higher level than before.  Minister Kishida commented during the meeting the importance of Fiji to Japan in terms of its relations with the Pacific Island Countries and it would like Fiji/Japan relations to be restored to new level. In the context of PALM 7 that Japan will be hosting in May 2015, they see Fiji as one of the leader countries in ensuring its success.

Japan would like to diversify its relation with Fiji to include cooperation in the United Nations and international for a generally. There were several specific requests pertaining to Japan candidature in UN bodies and cooperation in sustainable development of marine areas. 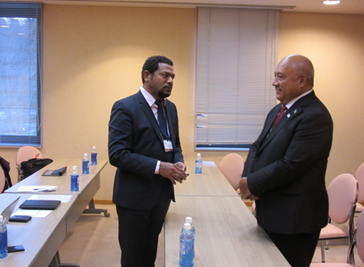 Minister Kubuabola and Minister Anthony of New Caledonia in closing.

A second bilateral meeting was held between Minister Kubuabola and New Caledonia’s Minister in Charge of Sustainable Development, Hon. Lecren Anthony which was requested by the latter. Discussion centred on Oceania 21 Climate Change submission to the COP 21 in Paris. Hon. Anthony stated his intention to collaborate with Fiji in the preparation of this submission and also within the PIDF frame. He thus expressed New Caledonia’s high level representation at the next PIDF Summit in August this year.

Hon. Kubuabola welcomed New Caledonia’s support for the PIDF and informed that the next Summit will be held on 12-14 August in Denarau Nadi. He assured Fiji’s support on the Oceania 21 proposal in terms of the COP 21.

Hon. Anthony shared his experience working with Fiji as regard the One Tree One Life scheme and mentioned that through this scheme he realised that Fiji is involved in networks that New Caledonia cannot access. He further informed that he has held meetings with USA, IMF and UAE in this regard. The Oceania 21 Summit to be held on 28-30th April hosted by New Caledonia was noted and the Hon. Kubuabola expressed Fiji’s possible participation subject to invitation, which thus would provide ideal platform for both countries to collaborate effectively on the Oceania 21 proposal. Hon. Anthony assured of sending an invitation for the Summit and indicative timeline. The Pacific Islands Roundtable briefing for COP 21 organised by SPREP to be held in May 2015 was also informed. Hon. Anthony mentioned that he intends to visit Fiji in April or May to discuss these issues further. Hon. Kubuabola welcomed the initiative and advised that in between time, senior officials of Hon. Anthony’s Office and Fiji’s MFA to constantly collaborate prior to the Minister’s visit to Fiji. 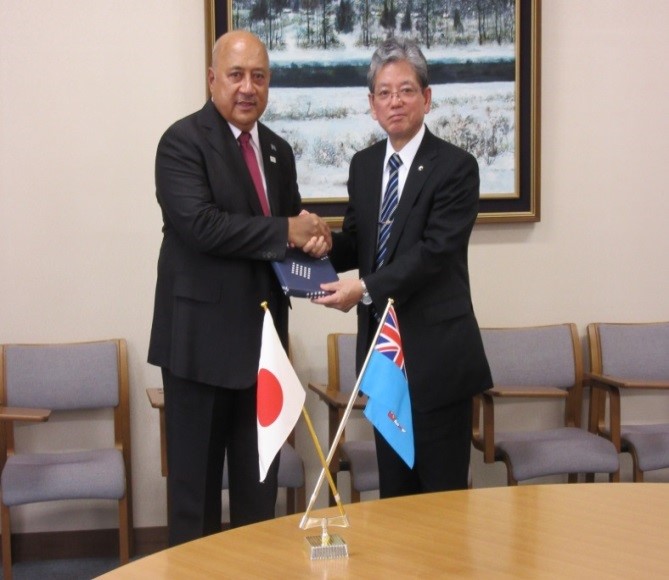 Dr Susumu expressed his appreciation towards the Minister`s visit and elaborated on the studies undertaken by Fiji nationals currently enrolled in the University. He added that through the Japanese Government and Local government, the University is currently undertaking projects on treatment of disaster waste management, further noting on Mr Savou`s thesis, which is based on recovery  and making energy from waste bagasse. Life Science, Engineering and Environmental Studies were a few fields of studies which the President advised that TU could probably collaborate on with FNU. The Minister in response thanked Dr Susumu and acknowledged the assistance that has been received thus far; advising on the two Fiji national students are currently enrolled at the university under the Japanese Government scholarship.

He stressed that Fiji already has close relations with the people of the Tohoku Region. Following the devastating earthquake and tsunami that struck the Tohoku region in 11 March 2011, Prime Minister Voreqe Bainimarama offered to assist families devastated by this disaster by relocating their children to Fiji to study for up to one year as guests of the Fiji Government, under Fiji Government’s Humanitarian Assistance Project for the Tohoku Region – Japan. He further added that Fiji has a very active and vibrant Honorary Consul General’s Office in Sendai and that we are all well connected to the business community here and the Tohoku region.

The meeting concluded with mutual expression of goodwill to each other. It was agreed that relevant parties should coordinate closely with each other to ensure smooth follow up. 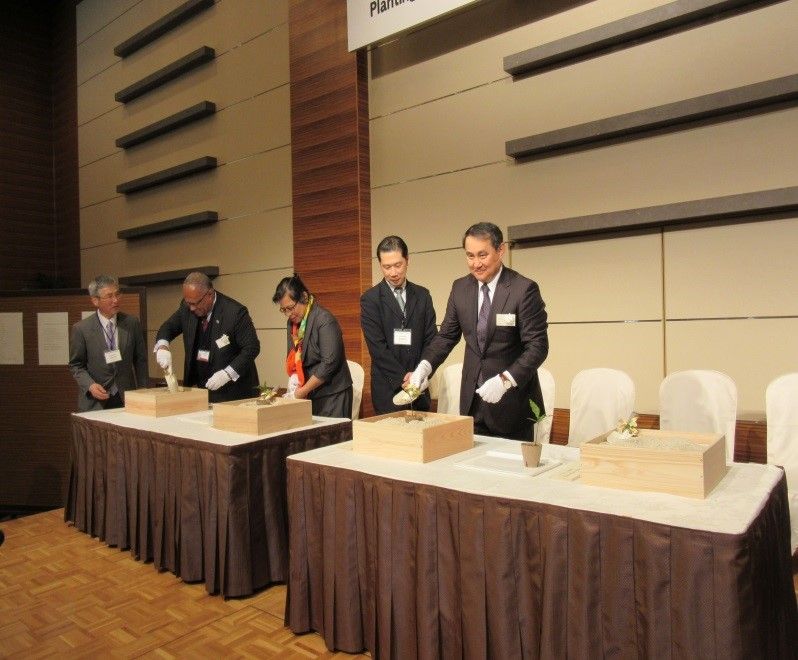 In our continuing effort to support the earthquake and tsunami devastated region of Tohoku, H.E Mr. Isikeli Mataitoga participated at the Kids Now Tree Planting Ceremony organised by the Non-Profit Organisation KIDS NOW Japan on 14th March. Fiji and Kiribati were privileged to be part of this tree planting goodwill which was facilitated by Fiji’s Honorary Consul General for the Tohoku Region, Mr. Takayuki Moriya. The trees are labelled Fiji and Kiribati and would be transferred to the Sendai Central Park at a later stage. 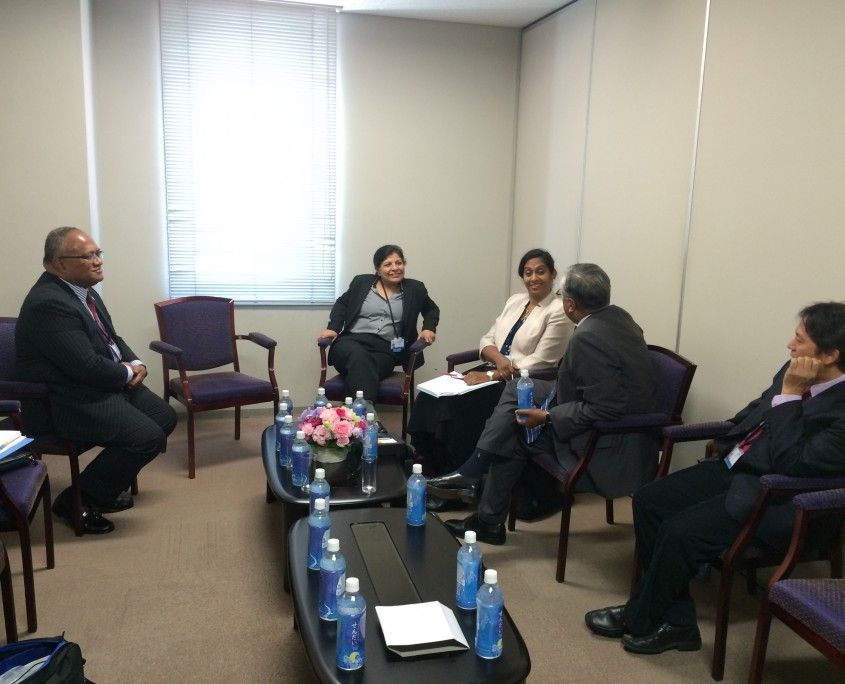 Ambassador Mataitoga with the UNESCAP Executives

On behalf of Minister Seruiratu, Fiji’s Ambassador to Japan, H.E Mr. Isikeli Mataitoga convened an audience with the ESCAP officials consisted of Under Secretary-General Dr. Shamshad Akhtar, Dr. Shamika Sirimane and Dr. Kilaparti Ramakrishna on Tuesday, 17th March. Assistance for capacity development in terms of mainstreaming DRR in Fiji’s agricultural plans to allow sustainable agriculture was the gist of discussion inter-alia. Dr. Akhtar stated that it is possible for ESCAP to mobilise funds and resources to hold this capacity building programme in Fiji. Ambassador Mataitoga also mentioned about pulling in some countries in this regard in view of South-South Cooperation which was consented to by Dr. Akhtar. Also, Ambassador asked if ESCAP could sensitize their Office in Suva about this training initiative. The meeting also seized the opportunity to inform the ESCAP officials of the PIDF structure and its objective and noted on the Samoa Pathway. 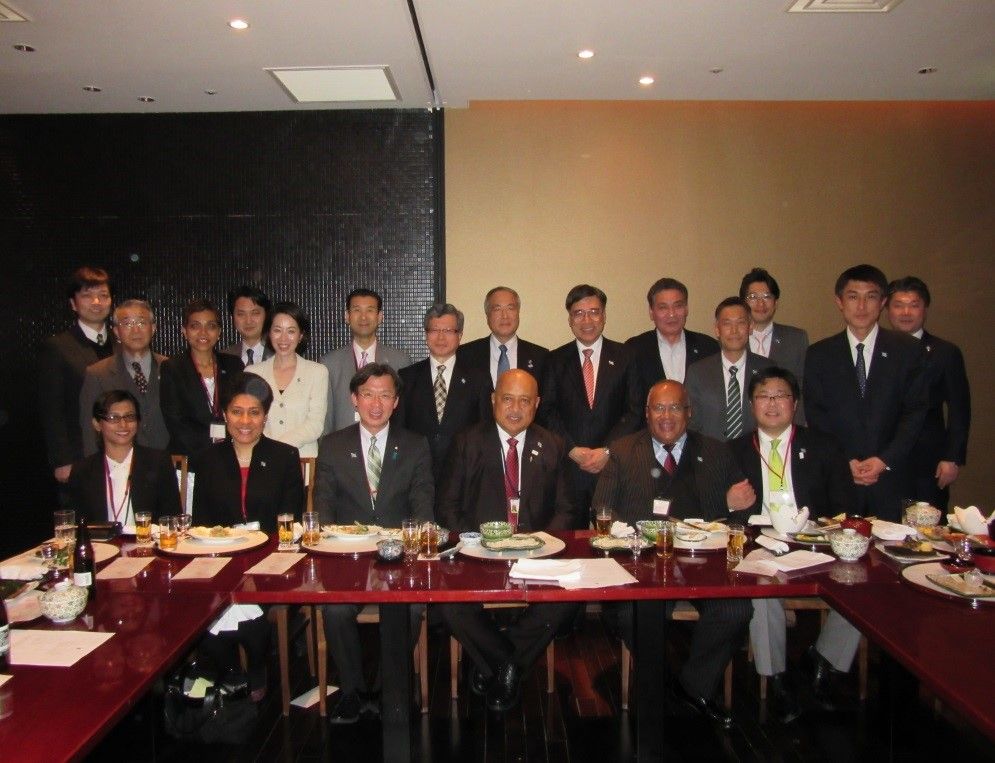 Hosted by HCG Mr. Moriya and Mrs. Moriya, a meeting over dinner was convened between Minister Kubuabola and Vice Minister Akiba, LDP Member of House of Reps (beside Minister Kubuabola) along with prominent business men of Sendai, some of whom are expressing interest to do business in Fiji. Most of these business moguls will be part of the Business Mission trip to Fiji that HCG Mr. Moriya is organising in July.