In a solemn ceremony held today Thursday 7 April 2016 at the Japanese Parliamentary Complex in Tokyo, Japan, the Honorable Mr. Fukushiro NUKAGA MP, Chairman of the Japan/Fiji Parliamentary Friendship League handed the financial donation from the Members of the Parliamentary League to Ambassador Isikeli Mataitoga. The money which will be initially deposited in the Bank Account opened in Tokyo for the PM’s TC Winston Relief and Rehabilitation Appeal before it will be sent to main account in Fiji, at the end of the appeal period which is 31 May 2016. 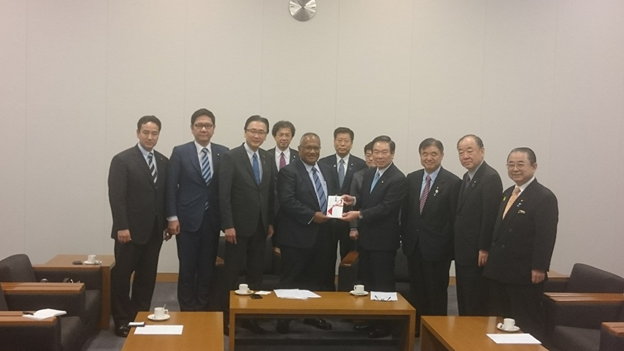 The Hon Mr. Fukushiro Nukaga MP handing the donation Ambassador Mataitoga on behalf of the members of the Japan/Fiji Parliamentary Friendship League

Ambassador Mataitoga in accepting the generous donation from Honorable Nukaga, expressed the deep appreciation and gratitude of the government and people of Fiji to the Japanese Government and people for their support towards Fiji in the aftermath of the devastation caused by TC Winston in Fiji on 20-21 February 2016. He also underscore the need for further Japanese assistance, in the rebuilding stage post TC Winston, in ensuring a more resilient and safe community is developed. Fiji will bounce back from this experience, more mature, resilient and a safer country as we learn the lessons of TC Winston.
There were three Ministers and 7 other Member of the Japanese Parliament attended the ceremony to personally express their condolences for the loss of life caused by TC Winston and to show their solidarity and empathy towards Fiji and its people at this difficult period in our history.
Fiji Embassy, Tokyo
7 April 2016.