A meeting between HE Ms Tania Tupou, Ambassador of the Kingdom of Tonga to Japan and HE Mr Isikeli Mataitoga was held on Friday, 16 January 2015. At the outset Ambassador Mataitoga congratulated Ambassador Tupou for the successful election just held in Tonga and expressed solidarity towards the new Prime Minister and the Government.

The principal issue discussed was the PALM 7 Agenda; specifically how new issues of priority concern to PICs be included in this year’s meeting agenda. The objective was to try to influence the Japanese Government in allowing discussion of new issues, such as limited market access for goods and services from PICs under some quota arrangement and tourism promotion in Japan for PICs.  These are issues which are central to the economic development of the PICs. The two envoys also discuss the positive impact PEC Fund has had in PICs and agree to seek their respective capitals support in raising the issues of the renewal of PEC Fund. 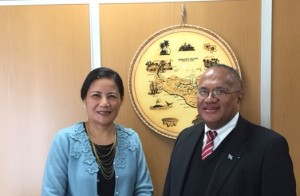 HE Ms Tania Tupou with HE Mr Isikeli Mataitoga