Counsellor Korovou met with the officials of the Bureau of Fisheries and Aquatic Resources (BFAR) on 23rd February 2015 at the BFAR Office, Manila with the object to establish strategic contacts and explore possible mutual cooperation. The meeting was attended to by Dr. Nelson A Lopez, Chief of Inland Fisheries and Aquaculture Division, Ms. Prescilla B Regaspi-Supervising Aquaculturist, Ms.Irma F Ortiz-Seaweed-culturist, Mr. Roy Ortega, Brackishwater Aquaculturist, and Mr. Balar- Aquaculturist. At the outset, Counsellor Korovou expressed her gratitude to Dr. Lopez and his staff for availing time from their busy schedule to meet with her and stated the purpose of her meeting  thus was to establish contacts with the Bureau and to explore  meaningful cooperation between Fiji and Philippine in the spectrum of aquaculture. The meeting, therefore, served as a preparatory process and space for initial findings for the planned visit of Fiji’s Minister for Fisheries and Forests to Philippine in the 2nd Quarter of 2015. In his prologue, Dr. Lopez introduced the major spheres of their aquatic resources which incorporate freshwater fishpond (milkfish and tilapia); brackishwater fishpond; fish pen and fish cage in fresh and marine waters, and mariculture of oyster, mussel and seaweeds. Notably, in 2012, the Aquaculture fisheries sub-sector contributed the highest value of about P92.3 billion or 38.8%  of total fishing industry production compared with the commercial and municipal sub-sectors contribution of P65.89 billion (27.7%) and P79.5 billion respectively. 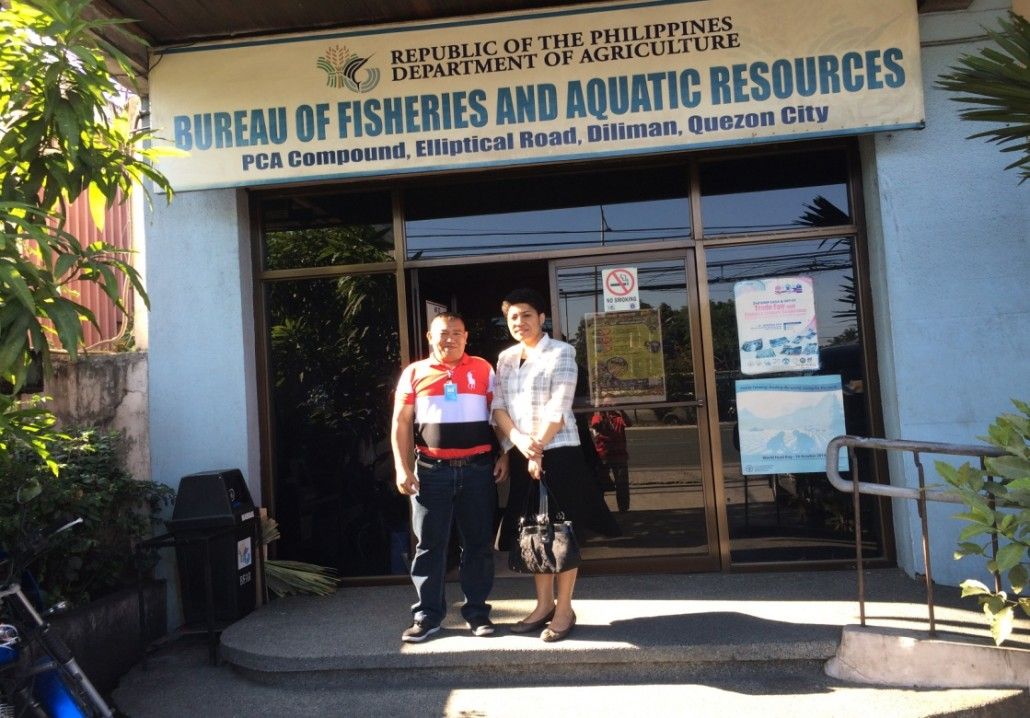 Practical experiences of fisheries projects in terms of gender basis approach in the Philippine were keenly noted. The range of fish farming practices in inland and coastal areas as well as marine were described including their various national aquaculture programmes. Appropriate legal instruments were mentioned as vital for the success of aqua-agri industry and its economics as in the case of Philippine. The presence of academic marine institutions in the Philippine was also highlighted, underscoring marine science and ecosystem as prominent courses currently embraced in Europe and Asia. Capacity building programmes for their youth population was also discussed. In that vein, Counsellor Korovou alluded to the prospect of exploring practical exchange studies and technical cooperation between the two countries. As such it was informed that Aquaculture is being considered as one of the significant sectors to growing a sustainable Fijian economy, apparently by way of establishing self-help projects and employment and long-term food security in view of Climate Change. Hence, Fiji desires to learn more on aquaculture economics from the Philippines through relevant mutual cooperation and technical exchanges with relevant agro-research and development laboratories and institutions.  Dr. Lopez assured that his Office would be prepared to render assistance to FET in future and thus encouraged follow on exchanges underpinning the objective and outcomes of the said meeting.  The Bureau looks forward to receiving Fiji’s Minister for Fisheries and Forests during his course of visit to the Philippine. In closure, Counsellor Korovou expressed gratitude to Dr. Lopez and his staff for the dialogue and insightful exchanges that transpired.