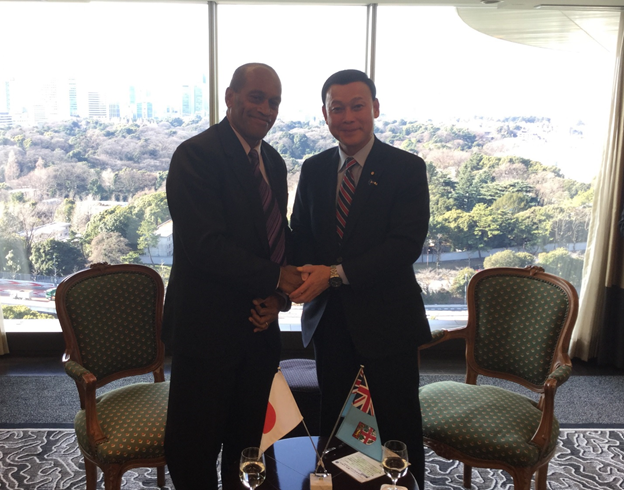 Hon.Takizawa informed of Japan’s support towards Fiji on these forums, as well as working closely with the Pacific Islands countries to ensure success in pursuing the outcomes of the 7th Pacific Leaders Meeting (PALM-7).  Mr.Takizawa also indicated the Japanese government’s willingness to continue its assistance in the areas of disaster risk reduction (DRR) and post-disaster rehabilitation particularly of schools in Fiji.  He added that He added that Japan eagerly awaits the outcome of the Fijian Government consultation with the Asian Development Bank (ADB) in regard to Nadi River Flood Control Projects, and looks forward to further assisting Fiji in its infrastructure rehabilitation and development needs.

The Parliamentary Vice Minister in acknowledging Fiji’s support towards Japan’s bid for the UN Security Council membership, also requested Fiji’s support in Japan efforts towards membership in the UN Commission on the Limits of the Continental Shelf (CLCS).

Hon.Minister Usamate expressed the Fijian Government’s appreciation for Japan’s continued assistance in the areas of disaster response and rehabilitation, and Japan’s longstanding commitment towards Fijian education and its contributions, through scholarships, towards the upskilling Fiji’s pool of human resources.  Minister Usamate informed that Fiji will continue to value its friendship with Japan, and looks forward to furthering this partnership.

Hon.Minister Usamate is currently in Japan to attend the Third Ministerial Interm Meeting for PALM-7 on behalf of the Prime Minister and Minister for Foreign Affairs.  He was accompanied by the Permanent Secretary  for Foreign Affairs, Mr.Robin Nair, Fiji’s Ambassador to Japan, HE Isikeli Mataitoga, and Fiji Embassy officials Mr Isikeli Nadalo (First Secretary) and Ms.Kelera Savu (Second Secretary).