More than 200 people attended the seminar jointly hosted by the Sasakawa Pacific Island Nations Fund and the Embassy of the Republic of Fiji in Tokyo on the topic “Recent Trends in Pacific Regionalism and the Role of Japan”. The seminar was held at the Sasakawa Peace Foundation building on Thursday, 27th November 2014. Turnout exceeded the sitting capacity of the meeting venue and illustrates the importance of the subject matter to the people of Japan. Fourty [40] percent of the attendees were from the Private Sector and the rest were academics, NGOs, students and diplomats. Support from the Pacific Island Embassies in Japan was also evident with four [4] of the Ambassadors including the Dean in attendance. The guest speakers were: Dr Michael O’Keefe, Senior Lecturer, Department if international Studies, La Trobe University, Melbourne, Australia; and Mr Feleti TEO, Secretary General, Pacific Island Development Forum [PIDF], Suva, Fiji. 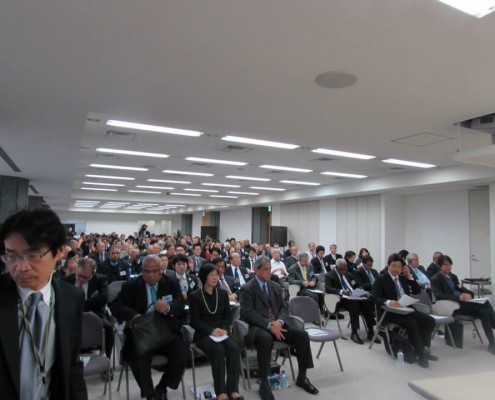 Turnout at the FET/SPF Seminar

While delivering his opening remarks, Ambassador Isikeli Mataitoga alluded to the subject to be explored in the seminar, in an open and candid exchange of views, the evolving regionalism that is taking place among Pacific Island Countries [PICs] and the role Japan may play within that. PICs are seeking new and more innovative ways to engage new partners in their sustainable development. As they engage in this new process of review, they are asking difficult but often necessary questions about the relevance and effectiveness of existing regional architecture in meeting the development aspirations of the Pacific islands people and communities.

Ambassador Mataitoga further added that Japan has been and continues to be a close and important partner of Pacific Island Countries in achieving their development goals. The principal framework in which Japan engages with PIC is through its development assistance program, delivered through the Japan International Cooperation Agency [JICA]. However, existing regional bodies serving PICs have all in recent times undergone review to determine whether they are still true to their mandate to serve the development aspirations of people of the Pacific Island Countries.

The outcome of these reviews, the latest being the Report of the Eminent Persons Group [EPG] on the Review of the Pacific Plan, Chaired by Sir Makere Morauta of PNG, concluded that there is a need for a new regional architecture for PICs; one which is inclusive of all development stakeholders and which addresses real development priorities as decided by the people themselves and not the policy imperatives of overseas development assistance, which sometime is divergent to local needs. Another major factor is that that a new regional architecture is needed due to the tectonic shift in the geopolitical interest shown by major powers of the world in PICs region.

While stressing the point of the need to review the aid delivery mechanism in the Pacific, Ambassador Mataitoga hinted on the recent visit to Fiji by Minister Narendra Modi of India and President Xi Ping of China. This comes after the visit of the Indonesian President in July 2014 and Russian Minister of Foreign Affairs HE Sergey Lavrov in February 2012. In addition the region have seen high level political leaders from Korea, Malaysia, UAE, Qatar, Brazil, France etc visiting the region all in the space of last 12-18 months. How do the PICs engage proactively with these developments so that each of the PICs and their people benefit from these engagements? Therefore, it is imperative to find a new regional architecture that would provide the capacity to manage these new developments, and the multilateral goals being pursued by Pacific Small Island Development States [PSIDS] in the various United Nations forums, especially on Climate Change and Adaptation.

It is against this developing regional and geopolitical context that Japan will have to manage its future role. So Japan really needs to project a much higher profile and more intense role in the emerging regional architecture for Pacific Island Countries. It needs to do this because first and foremost, it is in Japan’s security interest, both human and in contributing to a peaceful environment in the Asia-Pacific Region, to so. Japan’s new role should support sustainable development of PICs. As regards the latter, Japan must ensure that its engagement modality is not limited to the traditional approach but it needs to be a more flexible approach to address specific issues of concern for its Pasifika partners. Japan must regularly engage at high political level with PICs in the region to increase its visibility – creating new awareness is necessary for good relations between governments and for people to people exchanges.

The seminar was divided into two parts with session 1 which was moderated by Ambassador Mataitoga dwelled on the topic “Pacific Regionalism and Pacific Island Country Partnership”. Mr Feleti Teo delivered the keynote address and provided an overview of the newest regional institution in the Pacific, the Pacific Island Development Forum [PIDF], key motivations for its establishment; the roles it will play; and its relationship with other regional actors in the ever evolving and dynamic regional architecture in the Pacific. Session 2 was moderated by Dr. Izumi Kobayashi, President of the Japan Pacific Islands Association with the topic of “Towards Enhanced Economic Partnership and the Role of Japan”. The keynote address was delivered by Dr. Michale O’Keefe who is an expert in Pacific Regionalism. He articulated on the normative of aid delivery in the Pacific and how aid paradigm has shifted over the years with the new players in the market which depicts that the regional architecture in now under severe pressure to find an alternative solution. A classic example he quoted was Japan which used to be the number 2 donor of aid delivery to the Paicific during periods 1980s-90s. This has relatively declined from year 2000 onwards following the rise of China, Russia, Middle East Countries and now India’s influence in aid and bilateral delivery in the Pacific. 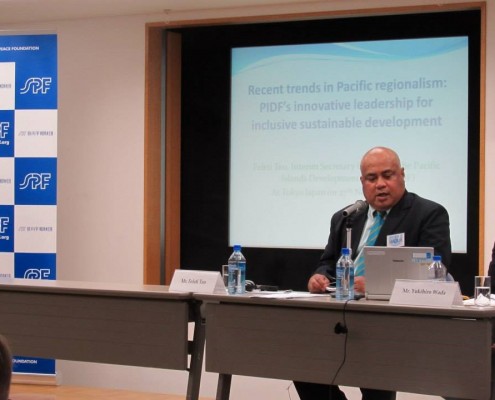 The views and exchanges generated from the seminar will no doubt assist relevant policy makers in Japan in their work as they begin to rebuild their engagement policy. 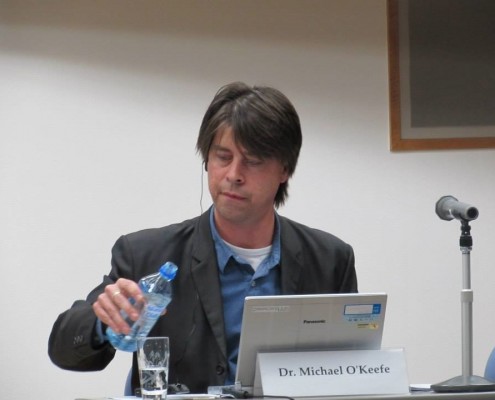 The PICs are not a homogenous community of nations – they are diverse in terms of their economies, population size, capacity constraints to handle their own development etc. Development partners must tailor their assistance to meet the development needs of the respective peoples concerned: one size does not fit all. New synergies need to be developed with creative financing development models that is beneficial to all and which is based on south-south cooperation. This is not a pipers dream. If we are resolved and focused, we will be able to find the answers to the challenges of ‘smallness’ that PSIDS now face.

As Prime Minister Bainimarama recently stated: Fiji is open for business and extends an invitation to all people of goodwill to invest in Fiji. The Embassy under took this project as it seeks to ‘Push Boundaries in Service Delivery’ through directly engaging with the Japanese private sector representatives, senior government officials, diplomats, representatives of Community Based Organizations, Academia etc. in Japan.

Sincere appreciation on behalf of the Embassy of the Republic of Fiji in Japan and the Government of Fiji as a whole to the Sasakawa Peace Foundation of Japan for co-sponsoring this seminar. Without their financial and logistical support this seminar would not have eventuated.